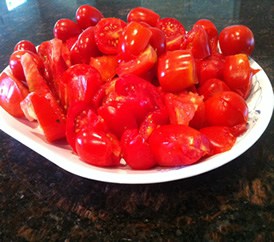 We’ve all seen and heard the talk of the monstrosity tomatoes, watermelons, or pumpkins that have won the grand prize at the county fair. However, do these colossal beauties really deserve the attention they so often get? Some might say a resounding No. In fact, some might say that the exact opposite is true and that the smaller fruits and veggies should be ‘taking home the hardware’ so to speak.

The Great “Small – and Healthy” Tomato

The truth is that research has shown that the smaller the fruit or vegetable the more essential nutrients it may contain. Smaller tomatoes in particular seem to be rising above the crowd. Although, we all love the thought of slicing up a nice large tomato, reality is that more lycopene nutrients is found per ounce in smaller tomatoes that have a darker red color. Lycopene is an antioxidant that aids in helping our blood cells to function better. It can also be helpful in the prevention of degenerative diseases as well as cancer, and heart disease. Lycopene can also be found in watermelons, papayas, pink grapefruits, as well as other red fruits and vegetables. Other nutrients found in abundance in these small red jewels are potassium, vitamin-a, vitamin-c, and zea-xanthin. Zea-xanthin is a compound known for filtering out harmful ultra-violet rays from the eyes which protects against macular diseases. These smaller tomatoes also contain a lot more flavor than their larger counterparts. If you want to impress your friends at the next social gathering with an amazing salsa recipe, then pick up some deep red cherry tomatoes. Although, they might be slightly more expensive they will contain more natural sugars that will lead to a much more dramatic ‘tomatoey taste”.

Other types of small tomatoes that you could look for are grape tomatoes, pear tomatoes, or plum tomatoes. Grape tomatoes are a little sweeter and less juicy than cherry tomatoes, which make a great candidate for salads. Plum tomatoes on the other hand are just a little larger with fewer seeds and are great for cooking and making sauces. They are also known to have a more intense flavor. Romas are of this type. Lastly, pear tomatoes are approximately the same size as their cherry counterparts but again without the high juice levels.

So, the next time the crowd at the local fair is admiring the watermelon that is as big as a small car, you can take pride in knowing that when it comes to fruit and vegetables smaller really is better.